Bringing out our inner Audrey Hepburn in the new Tandem Club anniversary snoods!

This blog is the story of how my dynamic crew finally got back on my saddles after a long months enforced lay-off due to heavy snow and ice with the “old git” and “old gal” having their first outing wearing their new Tandem Club UK snoods. It also features Team Matilda enjoying being the subject of a publicity focus from Sustrans, who look after The National Cycle Network.

A whole 34 days after the second ride of #Lockdown2 the weather decided to warm up a bit and finally thawed the heavy snow and thick ice which had turned our home area in Auchterarder in south Perthshire into a permafrost winter wonderland.

The snow lay to a depth of around a foot at Team Matilda’s Auchterarder base.

Now as tandemers and cyclists know, snow and icy conditions are not remotely conducive to pedalling so my dynamic crew were stuck in doors – looking out at the snow which lay to a depth of about a foot.

The “old gal” and the “old git” did make good use of their time by embarking on a major DIY “Changing Rooms”-style project at Matildas Rest – decorating every room in the house over a four week period!

The “old gal” in “Changing Rooms” mode – wallpapering the bedroom with a zebra mural!

But despite their dedication to the DIY – and becoming “experts” at painting and wallpapering! – my dynamic crew were desperate to continue their second #lockdown adventures – while adopting Cycling UK Scotland‘s #cyclingfromhome mantra in #tandem in rural Perthshire, mainly on Sustrans Scotland and The National Cycle Network routes.

There had been a glimmer of of hope that we would be able to get out on a romantic St Valentine’s Day pedal on our bicycle made for two – but the weather sadly decided not to play Cupid.

The “old git” and “old gal” did however have some heart-warming loved-up tandeming publicity to keep them occupied over their hot #lockdownlurve Valentine date night as Sustrans timeously decided to feature my Matildas Musings blog in a question and answer feature in a bid to give romantic inspiration to other cyclists! Naturally it focused on my dynamic crew’s story of how they met – with the headline: “Love on the National Cycle Network: how a tandem-biking blind date brought a couple together.” Click on the image to read the article!

The amusing feature also focused on the on-going success of my status as the UK’s only blogging tandem bike, and how our fun adventures in tandem help Team Matilda to survive lockdowns – as well as why tandeming is growing in popularity, and our favourite recommended route on The National Cycle Network of Rt 7 from Callander to Killin.

It is actually the second time in recent months that my dynamic crew have been featured by Sustrans as they made a “starring” appearance in a promotional video made to mark the 25th anniversary of The National Cycle Network #NCN25th.

Click on the video below and see if you can spot the “old git” and the “old gal” in their fleeting appearances at 36 seconds; 56 seconds; and at 1 minute 46 seconds! Blink and you will miss them!

All this publicity has been going to my head a bit – as a quiet demure and reserved “old lady” tandem!! – so back to the pedalling! My dynamic crew decided on a simple route to get their legs free from enforced inaction – a Braco loop with (whisper it!) another DIY coffee stop! You can check out the details of our route by clicking on the Strava map below. 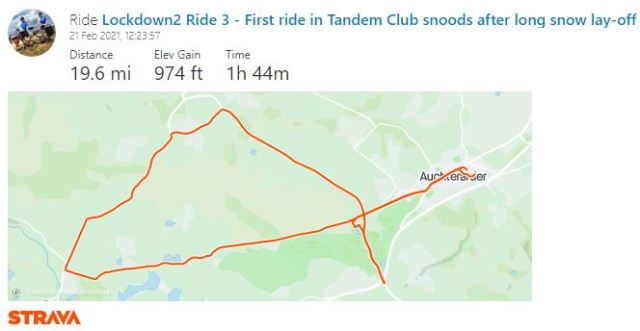 The ride gave my dynamic crew their first opportunity to wear their new Tandem Club UK neck scarves – known as snoods or buffs – which was a welcome free gift to all members to commemorate the Club’s 50th anniversary this year in 2021.

As you can see from the picture at the top of this post the “old gal” decided on a pose that brought out my dynamic crew’s inner Audrey Hepburn – the “old git” played along although he was a tad disappointed that they had to make do with “Breakfast at Auchterarder”!

Then “the old gal” promised to take the “old git” on a fun mystery tour after pulling the snood right up over his face so he couldn’t see! At least his sunglasses matched!

The “old gal” promising to take the “old git” on a fun mystery tour!

That nutty picture session continued as that pose was reversed which left the “old gal” looking like she had been kidnapped and forced out on a ride – but she went willingly! … honestly! 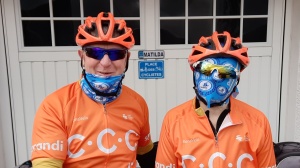 The “old gal” looks like she was kidnapped and forced out on a ride! She went willingly … honestly!

Incidentally, if you are a tandem rider, and not a member of the Tandem Club UK – what are you waiting for? Membership is great value at just £15 a couple. For more details of how to join click here!

After a more sensible shot with the snoods as neck warmers it was time for the serious pedalling – with all three members of Team Matilda feeling a bit rusty. It was good to see it wasn’t just me – as an “old lady” #tandem – who was feeling the pain after our enforced lay-off!

But we almost didn’t get to ride as just before we headed off the “old git” decided to test my gears and found my chain was completely clogged up with mud and grit from our last ride – and my pedals wouldn’t turn. Seems the “old gal” had “forgotten” to give me a spruce up after my return to the garage! While the “old git” did his usual panicking routine, the “old gal” took control and in her role as Team Matilda’s chief (and only!) engineer got to work with a hearty doze of chain cleaner and a toothbrush which soon had me back in action!

We headed up thru the high street of our home base town of Auchterarder (the longest high street in Scotland by reputation!) continuing up past the back entrance to the luxury Gleneagles Resort and out towards Braco. We then turned right towards Crieff where we had a rapid (standing!) DIY coffee stop! This “not a picnic” was much required by the “old git” and “old gal” to keep warm!

A welcome cup of coffee for my dynamic crew – but obviously NOT a picnic!

The weather had promised an almost Mediterranean 11C – but there was a fairly fierce wind which meant the temperature never hit those balmy double digit high spots!

We then pedalling back towards Auchterarder – riding thru the plush grounds of the all shut up luxury five star Gleneagles resort, which sadly meant no posh afternoon tea for my dynamic crew! It was however quite sad to see the playground of the rich all closed. 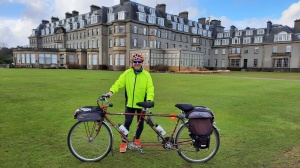 The luxury five star Gleneagles Resort all closed up – so couldn’t get posh afternoon tea!

A quick photo at a flyover over the A9 revealed the trunk road linking the central belt with the Highlands was virtually deserted due to #Lockdown2.

Very quiet during #Lockdown2 on the A9 trunk road linking central belt to the Highlands.

On the final couple of miles back to Matildas Rest there was great joy for my dynamic crew with a new Team Matilda record being flashed up on a speed camera sign coming back into town – at 25 mph! Simple pleasures!

Back indoors – and after finding that my crew’s legs did in fact remember how to pedal! – the “old git” checked Strava which officially recorded the ride as as being worthy of 5 gongs – including one personal best and two 2nd bests! And amazingly the other 2 gongs were for being awarded “local legend” status on two separate sectors! So I guess the legs were not that rusty! This was definitely the cause for celebration and a screen grab of Strava had to be taken to be recorded for posterity!

The detailed Strava figures showed my dynamic crew tandemed a distance of 19.6 miles with a moving time of 1 hour 44 minutes. The average speed was a healthy 11.3mph despite the fresh headwind! Elevation was 974 feet. The maximum speed was 32.0 mph and Team Matilda managed to burn up 1,241 calories and produce an average power output of 177 W.

As always the route is brought to life in our Relive 3D mapping video – so take a look below.

The feel good factor from #Lockdown2 Ride 3 was a welcome feeling – reminding my dynamic crew that despite the vital Covid-19 restrictions, it’s great fun being out pedalling on a bicycle made for two in our rural Perth and Kinross Cycle Campaign, Perth and Kinross Countryside Trust, Auchterarder Community Cycling and Love Perthshire area.

Team Matilda is hoping the Arctic weather has now gone for the winter so they can clock up more #lockdown miles on more fun spirit-lifting adventures! 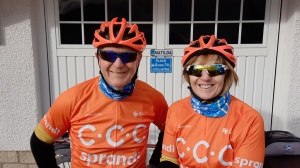 The Tandem Club neck warmers are a welcome addition to my dynamic crew’s kit!