The imaginative Crieff Cowches art trail has come to an end – which reminded me to write a blog about my dynamic crew’s great great tandem trip round all 11 of the installations on a sun-kissed evening in August – where Team Matilda saw Crieff looking at its glorious best.

The cleverly decorated Cowches will be seen together for a final horn blowing hurrah on October 9, where they will be sold off at a charity auction.  So with the fundraiser fast approaching I decided it was time to post my blog – which recounts our attempts at Co(w)rralling the Cowches in C(ow)rieff!

Firstly a short bit of background. The Highland cow benches – or cowches for short – made up a unique art trail which succeeded in its aim of bringing huge numbers of visitors into Crieff during the summer. Each cowch had been individually decorated by local artists – who were given carte blanche to let their imagination run riot!

Why use Highland cows as the basis for this unique cultural trail? Well because Crieff occupies a key position between the Highlands and Lowlands of Scotland, the town became the cattle-droving crossroads of Scotland in the 1700s – with up to 30,000 of the beasts arriving for market each year.

The Crieff Cowches trail was organised by Crieff Succeeds – the town’s Business Improvement District programme, which aims to promote Crieff as a vibrant, attractive and safe place to work, shop, visit and live. The trail has been actively promoted by the VisitCrieff tourism internet and social media sites.

So with deep blue skies and warm sunshine my dynamic crew decided to pedal round the art trail on a fun early evening ride – which would include a picnic tea at one of the Cowches! You can check out the details of our route by clicking on the Strava map below. 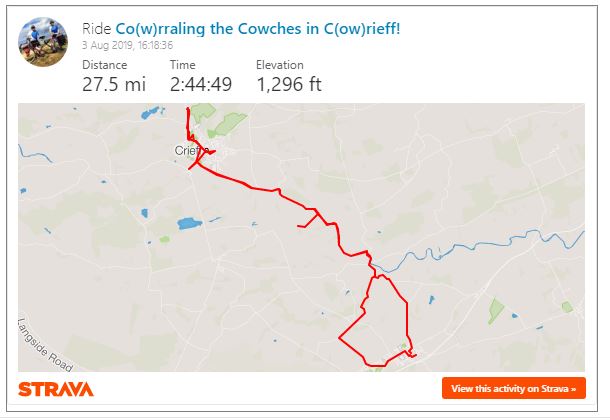 We pedalled away from Matildas Rest in Auchterarder and firstly tandemed along the quiet country roads to The Library of Innerpeffray – which is Scotland’s first ever free lending library dating back to 1680. The gardens of the historic building – including St Mary’s Chapel with its fascinating graveyard, offered an inspirational spot for the “old git” and “old gal” to tick off their first Cowch, and number 11 on the trail map. This one was simply known as Innerpeffray Cowch and was created by June McEwan.

A few more miles and my dynamic crew arrived in Crieff itself, crossing Crieff Bridge to find the cleverly named Emoojis Cowch by local schoolgirl Sinead O’Malley – which is a cow covered in emojis, the smiley faces used in electronic messages.

Next Team Matilda decided to tandem around the town to Glenturret Distillery – recognised as Scotland’s oldest working whisky distillery after being established in 1775. Here the “old git” was happy to pose beside the Cowch named On Watch by Chelsea Rodger.

Cowch 10 – On Watch by Chelsea Rodger

The next stop saw us tandem downhill from the distillery to Turretbank where the “old gal” took the opportunity for a quick rest on the Cowch called Polly, created by Donna Connelly.

Tandeming into Macrosty Park my dynamic crew found the bandstand – and were able to tick off seeing Bloomin Flora by Liz Paterson. The “old gal” decided that she would enjoy a few minutes basking in the bright sun on this Cowch! 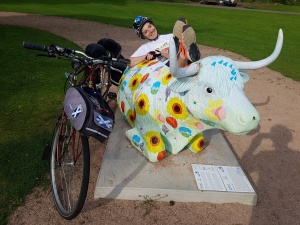 Into the town of Crieff itself and Team Matilda tandemed up the High Street, stopping at the town hall after spotting the Sweet Annie Cowch, created by mosaic artist Katy Galbraith. 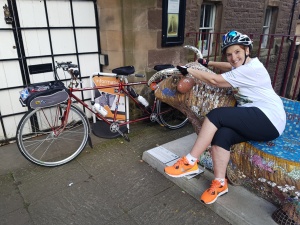 My dynamic crew had now ticked off more than half of the Crieff Cowches, but nearly missed the next one as it was placed in the grounds of Old St Michael’s Churchyard which we found difficult to find for a moment or two. But it was worth the hunt to discover Midnight Meadow by Ceri White.

With the warm sunshine, the “old gal” decided it was time for a much needed refreshment which was enjoyed at the welcoming Quaich Bar on Crieff’s High Street. Revitalised, the next stop was at the Crieff Highland Gathering Cowch in James Square, the second on the trail to be created by June McEwen.

Crieff’s central James Square was where Drovers Coo was to be found – created by Hamish Bigg to pay homage to the town’s historic links to the cattle drovers.

Just a few yards away, Kings Street was the site for my dynamic crew to tick off A Heilan Cooch, created by Catherine Redgate. It was great to see so many families having fun walking round in the evening sunshine, ticking off the Cowches from the trail map, creating a real buzz in the town 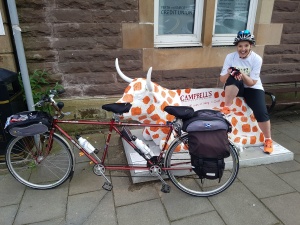 The 11th and final Crieff Cowch on Team Matildas art trail was the amusingly named Military Coo by artist Gail Robertson which was situated in the grassy gardens of the town’s medical centre.

Now the “old gal” is a friend of Gail Robertson, and knows she has a sense of humour, so knew she would not be even slightly offended that my dynamic crew used Military Coo as a perfect bench on which to set up a picnic tea! Our alfresco meal attracted a bit of attention from locals in a nearby pub – who all agreed that it was a good way to use one of the Cowches! 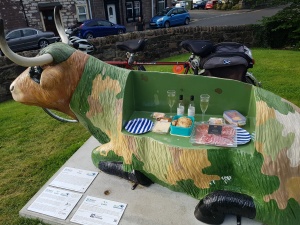 The Military Coo installation made a perfect picnic for my dynamic crew’s picnic!

After a tasty picnic – and having seen all the installations on the art trail – it was time for Team Matilda to pedal back home to Matildas Rest. Check out the full data from the ride at the end of the blog.

Meanwhile the artworks are set to be sold off at the Crieff Cowches Auction – a ‘dress-to-impress’ gala dinner at Crieff Hydro on Wednesday October 9. My dynamic crew hope the auction raises lots of money to help support Scotland’s Charity Air Ambulance.

For those that like to study the figures, this was certainly one of our Team Matilda’s fun and relaxed pedals and Strava officially recorded the ride as showing that my dynamic crew tandemed a distance of 27.5 miles with a moving time (or should that be moooving time given the subject of this ride!) of 2 hours 45 minutes. The average speed was 10.0 mph and the overall elevation was 1296 feet. The maximum speed was 34.5 mph and Team Matilda managed to burn up 1725 calories and produce an average power output of 156 W. Almost by accident my dynamic crew recorded 11 gongs along the route – with 3 personal bests; 4 second bests; and 3 third bests.