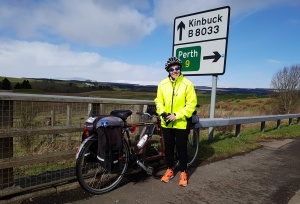 Spot the blue sky! The “old gal” near Dunblane at half-way – with snow just round the corner!

The phrase “four seasons in a day” has been used by Scots people for years to describe the unpredictable Spring weather which the gods can cast down on us! And our recent sneaky Monday off tandem ride was a perfect example of where it was simply a waste of time trying to guess the best cycling clothing to suit the conditions!

My dynamic crew experienced all four key elements of Spring, Summer, Autumn, and Winter rain, sunshine, wind, and even snow on their latest training ride for Team Matilda’s forthcoming Hebridean Way adventure in June. In fact some would say it was just ideal conditions to prepare for the ride “on the edge” of Scotland!

More about the HebWay at the end of this blog, but first today’s ride. The “old git” had decided it was time to test the “old gal” on a few hills on a canter to Dunblane, with the promise of a coffee and cake stop on the return leg at Braco – although to be fair he hadn’t quite calculated the total elevation involved of over 1400 feet … or the inclement weather conditions!

You can check out the details of our route by clicking on the Strava map below. 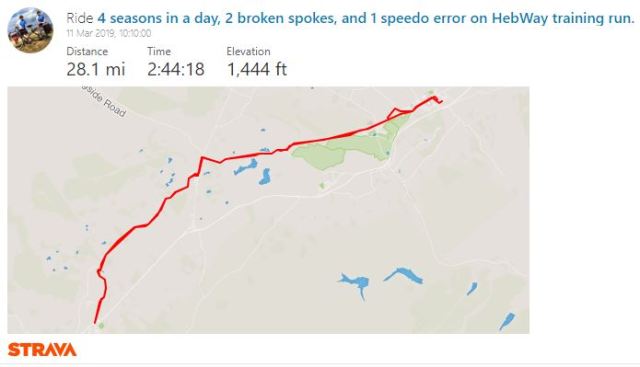 The route started with some uphill tandeming from Matildas Rest out on the open rural Perthshire roads past Gleneagles Hotel and its world-famous golf courses. Despite the thrust required for the incline, the “old git” applied the brakes when he saw a special road sign designed to protect red squirrels by urging motorists to drive carefully. Maybe the sign should also have said ride carefully!

The “old git” slowed down when he saw the road sign designed to protect the red squirrels.

After the Gleneagles summit my dynamic crew enjoyed a nice downhill stretch although a fairly blustery head wind meant the “old gal” had to keep pedalling as stoker when normally this downhill stretch allows for a bit of free-wheeling! Just the first of many encounters with the ever changing weather on this ride!

Pedalling on we tandemed thru Braco – with the “old gal” checking that the coffee shop was open as we pedalled past and headed up a few more tough inclines to just outside Kinbuck where the “old git” spotted a crop of Christmas trees getting ready for next festive season!

The “old git” pointing out my dynamic crew’s Christmas tree for December!

Oh how the “old gal” laughed when he joked that they could come and choose their tree in early December and could even carry it home attached to my frame! Well I think he was joking anyway!

A few pedals further on my dynamic crew passed the entrance to Cromlix House – the 5-star country house hotel owned by local tennis superstar Andy Murray. It boasts a Chez Roux restaurant and the “old gal” started to drool over what they may be serving up for lunch – but sensibly decided she wasn’t quite dressed for that kind of culinary experience!

A quick stop at our turning point on the flyover of the A9 just outside Dunblane for some water – and the chance to take in the blue sky which had suddenly appeared, and the views over to the sun dancing on the snow-capped hills in the distance.

Time to move on, and despite the pesky wind it was a great day to be out in glorious Perthshire. For a welcome respite from the challenging weather conditions there was a pit stop at the bike-friendly Braco Coffee shop !

The “old gal” in heaven with scone, millionaire shortbread and a nice strong coffee! Perfect!

As we walked in it was good to see the premises so busy – with several other cyclists and locals having decided to stop en route for sustenance. The “old gal” chose a scone and some yummy millionaire shortbread – all of which was washed down by lovely strong coffee – just the way she likes it! Great friendly service too from the Braco team! A perfect stop on a bicycle made for two really – and just underlines the fun and laughs my dynamic crew have!

As my dynamic crew emerged from the coffee stop they were hit by a shower of rain – the third of the seasons after the wind and the sunshine – but fortunately the worst of the rain seemed to have fallen when they were inside. The four seasons in a day were however completed as the “old git” and “old git” battled the rapidly changing weather conditions on the return stretch from Braco to Gleneagles where in a shady hollow they came across snow lying on the ground! Yes snow!

Four seasons in a day – tick – snow lying on the ground in a shady hollow.

It was a hard grind for my dynamic crew on the return – but a welcome downhill brought about one of those moments of madness when the “old git” and “old gal” just have to laugh out loud! Pedalling as fast as they could the “old git” checked the speedometer – expecting to see it hit 30 mph if they were lucky … only to see it suddenly record a top speed of 91.5 mph.

They say the camera never lies! – evidence of the 91.5 mph recorded on the malfunctioning speedo!

Yes you read that correctly – a reading of 91.5 mph on a bicycle made for two. Despite the fact that the camera never lies and the photographic evidence of this never-to-be-repeated feat, my dynamic crew graciously conceded it clearly was a speedo malfunction!

Then just to compound the unpredictable nature of the ride, as we were heading down towards Gleneagles there was that unmistakable ping – which can only mean a spoke had pinged on my rear wheel! My dynamic crew ground to a halt and surveyed the damage – not one but two spokes had gone!

The rest of my wheel looked fairly sound – and despite a clear wheel wobble – the “old gal” took the decision as chief engineer that we could continue to pedal and limp home at a somewhat slower than normal speed, while the “old git” did his best to avoid any potential bumps. Looks like I am going for a visit to my personal surgeon John – bike wheel builder extraordinaire at JM Richards Cycles in Perth

Spot the two broken spokes! I need a visit to my personal surgeon to repair my rear wheel!

Safely back at Maitildas Rest, the “old git” checked Strava which officially recorded the ride as being worthy of no less than 14 gongs – which given the variable conditions is somewhat impressive! Especially as the total was made up of 3 second bests; and 11 third best times.

The detailed Strava figures showed my dynamic crew tandemed a distance of 28.1 miles with a moving time of 2 hours 44 minutes. The average speed was a healthy 10.3 mph while the elevation was a hilly 1,444 feet. The maximum speed was officially 32.0 mph – not the rogue 91.5 mph! – and Team Matilda managed to burn up 1,691 calories and produce an average power output of 154 W.

As always the route and pictures are brought to life in our Relive 3D video – so take a look below.

So that’s another near 30 miles in the bag – and given the weather conditions, mechanicals, and the 1,444 ft elevation it was an ideal training then for the Hebridean Way in mid June. I am looking forward to teaming up with Siggy, the attractive gent of a tandem belonging to the “old git” and “old gal’s” good tandeming friends John and Jane – who have their own Travelling in Tandem blog – for our self-proclaimed Nutty Tandemers Club tour.

But obviously there’s a good few training rides for the “old git” and “old gal” to get in peak condition before they tackle the 185 miles of the #HebWay route from Vatersay to Butt of Lewis Lighthouse at Ness over 5 days tandeming! What is it they say about practice makes perfect?

6 thoughts on “4 seasons in a day, 2 broken spokes, and 1 speedo error on HebWay training run.”