It all started so well! With just three weekends till the Grand Depart of Team Matilda’s Tour de Bordeaux the idea was to do a tough training route up and down the side of Loch Katrine. But the best laid plans of mice and men and all that …. as the cycling ended in bewilderment (and not a little frustration) with a major equipment failure. Read on for the latest adventure! 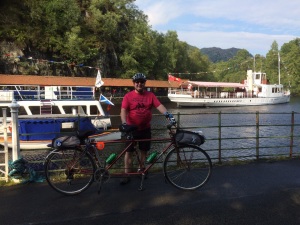 All smiles at the start at Trossachs pier.

Ten o’clock on a wonderfully sunny Sunday morning – after the “old git” managed to persuade the “old gal” that getting up early was preferable to sleeping – and we were ready to go at Trossachs Pier after a short half hour drive in Matilda Transport.

We were parked up at the head of the beautiful Loch Katrine ready to cycle down to the bottom of the loch, and then – after lunch – cycle back up again. The distance was a manageable 26 miles – although the terrain is fairly hilly. (“That’s HILLY rather than undulating” shouts the “old gal”!)

A simple plan for one of the last major training runs to boost fitness for Bordeaux, and the “old git” – as he is want to do – had even worked in a  carrot to get us moving at a reasonable speed. He had done his research and discovered that there was a two-hour rhythm and blues cruise on the historic and elegant steamship the Sir Walter Scott scheduled to depart Trossachs pier at 4 in the afternoon. So he booked a couple of tickets so the dynamic duo could relax after their exertions!

All sounded too good to be true – and it nearly was! Cycling down the loch was a breeze, with the “old git” setting a fair pace and the “old gal” doing her bit as chief stoker. They even managed to nail a few of the hills that previously required them to get off and push.

The route down the side of the loch is a well maintained private road owned by Scottish Water who use the loch as a reservoir to supply Glasgow. The dynamic duo were really enjoying the cycle – in unseasonably warm sunshine – while taking in the amazing scenery of the Trossachs, at the heart of Scotland’s first National Park.

In what seemed like no time at all we reached the bottom of the loch and cycled round to Stronachlachar for a welcome break. There is a fantastic spot for lunch there – the Pier Cafe – right on the pier which the boats dock at when taking passengers up and down the loch.

It is a magnet for cyclists, but the “old gal” managed to grab a table outside on their decking with the most incredible view all the way up the loch. She really is an (under appreciated) star, you know! 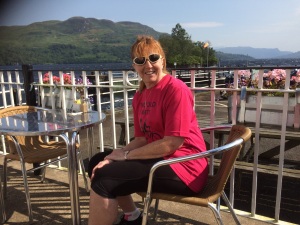 It really is a treasure of a find, in a very remote corner of Scotland. All food is home-made on the premises and after a much-needed chilled drink, extremely tasty paninis were ordered and demolished! Coffee and cake (gluten-free for the “old gal”) followed before it was time for the return journey. Five stars for the food and service at the Pier Cafe, and remarkably good value too.

After that pit stop, and with the sun still shining down, the “old git” and the “old gal” were in remarkably good humour as we set off for the 13 mile trip back up the loch. It was now one o’clock which left plenty of time to get back to the pier, and then changed for the cruise.

So off we pedalled making our way round the head of the loch, and again the dynamic due managed a couple of hills.

But then coming off a long downhill stretch – some three miles into the journey –  disaster struck. The “old git” had given the command to “pedal” to keep the momentum going to get us up the next hill – when there was a loud crack!

A pained expletive from the “old gal” quickly followed as we ground to an unceremonious halt.

“What happened there?” asked the “old git” – only for the “old gal” to point to the road surface where one of my pedal arms and one of my chains were lying in a crumpled heap. She also pointed to a nasty bash on her shin where the pedal arm had hit as it broke. Ouch!

The pedal arm had sheared clean off the pedal crank axle. It seems its my “old age” – because it was a clear case of metal fatigue. There was nothing I could do to help as a tandem without pedals is about as much use as a chocolate fire guard! 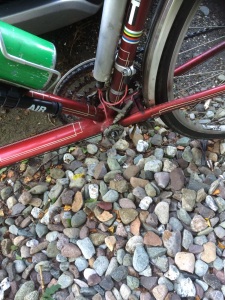 But I have to say the “old git” and the “old gal” were incredibly sympathetic towards me – as clearly I had let them down badly, wrecking their well-engineered plans. But there was no prospect of a repair by the lochside – so the only solution was to walk back the three miles to Stronachlachar pier and hopefully get the tourist boat back up the loch to the car park at the top.

This was easier said than done as the “old git” was hugely frustrated, the route was very hilly and it was warm. Oh and we had to do a route march pace to cover the three miles in less than an hour to get the boat timetabled at 2.30pm.

But make it we did – with my dynamic duo looking a little less than dynamic as they were both exhausted and dripping with sweat.

The boat – The Lady of the Lake – was extremely busy as it was such a beautiful day, but we managed to squeeze on, along with lots of other bikes. The wind had picked up now, and the “old git” thought it would be a good plan to sit on the top deck outside. But sailing into the wind – waves soon broke over the bow and drenched the passengers – which didn’t improve the “old git’s” mood any! Oh how the “old gal” laughed!

Within an hour we were docking at Trossachs Pier, and I was lifted off by a very muscular member of crew, and pushed back to Matilda Transport. There was just time for a further examination of the damage done to my pedal crank axle.

The bolt had just broken, leaving jaggy edges. Definitely repairable – but only by professional bike technicians. 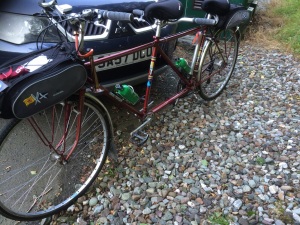 I did feel sorry for the “old git” and the “old gal” as they had hoped to complete this route to fine tune their training – but, as they both said – it was a blessing it happened here in Scotland and not in the middle of the Tour de Bordeaux! 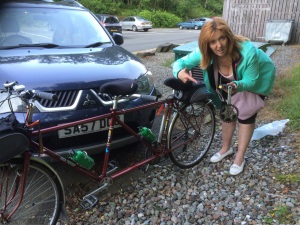 I was packed back into the car, and so as not to spoil all of the afternoon, the “old git” and the “old gal” ran to join the cruise.

And if there was a way to forget about the trials and tribulations of earlier this was it. On an iconic 115 year old steam ship. listening to rhythm, blues and rock and roll music from a superb group called ‘Hoochie Coo’, while taking in the ‘brain food’ of the stunning mountains and scenery. And the “old gal” had packed one of her famous picnics – including the essential small bottles of prosecco – which were enjoyed on deck.

We all arrived back at Matilda’s Rest somewhat shattered – my pedal crank axle actually shattered! – after a traumatic long day in the sun.

But the good news is that the “old gal” whisked me off to my specialist consultant doctors at JM Richards bike shop in Perth who promised I would be back fully fit within a day. And they were as good as their word, fitting a custom-made pedal crank axle.

So  now I can’t wait to get back out on the open roads of Perthshire this weekend so I can prove to my dynamic duo that I am ready for Bordeaux!